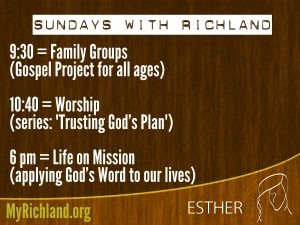 This coming Sunday morning during our worship service (10:40), we’ll be starting a new series through the Book of Esther titled Trusting God’s Plan. Throughout this 7-week series, we’ll see God’s sovereign and providential hand at work in numerous ways. Below is a breakdown of what we’ll be discussing each week.

To keep up with the audio recordings of the messages, you can visit our sermons page or follow RichlandBaptist on social media through #MyRichland and #RichalndEsther .